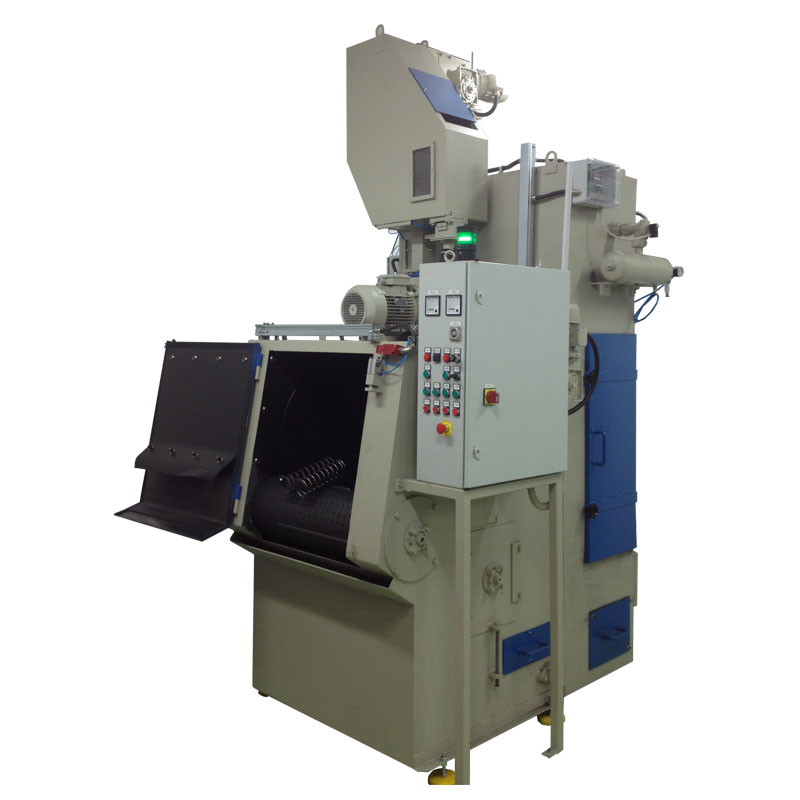 Blast wheel systems of this type are called "B" (Belt), because the workpieces to be blasted are automatically turned and rotated in a trough belt. The trough acts as a driver and conveys the components to the rear wall whereby sliding down again under their own weight and turn in the process. The parts to be blasted can be placed in the trough individually or as bulk goods until the maximum component dimensions and the maximum permissible weight for the corresponding trough have been reached. The centrifugal wheel is arranged directly on the cabin roof above the trough, so that the entire width of the trough can be treated over its entire surface.

The working cycle is as follows:

The front door closes the machine dust-tight. This door is linked to the start/stop of the blast turbine and keeps the door locked and closed.

The trough belt begins to move and the components are circulated within the trough.

The trough belt , which can be made of rubber or steel, has small perforations adapted to the components through which the mixture of blasting media, burrs, sand deposits, tinder and/or other impurities falls into the lower part of the machine (system funnel) and through the funnel slope is directed to the bucket elevator. (Sometimes a vibrating screen is also used in the system hopper, which separates the abrasive from larger contaminants)

From here, the mixture is transported up to the abrasive preparation (air sifting). (If steel blasting media have to be separated from cast sand, a special magnetic separator is also used) The air separation separates dust and impurities from the clean and reusable blasting media .

The waste is conveyed into a downpipe, which discharges the impurities from the closed circuit. The clean blasting media is continuously fed into the silos. From there it is returned to the blasting wheels via the control valve, which closes the blasting media cycle.

The extraction of dust from the blasting chamber and from the abrasive preparation is carried out by a central exhaust air and filter system.

As soon as the work cycle is finished, the door opens (with manual doors a visual and acoustic signal sounds that the door can be opened) and the troughed belt changes its direction of rotation so that the components are conveyed from the front of the system into boxes or pallets of the customer. Alternatively, the components can also be transported away by means of a conveyor belt or vibratory conveyor. 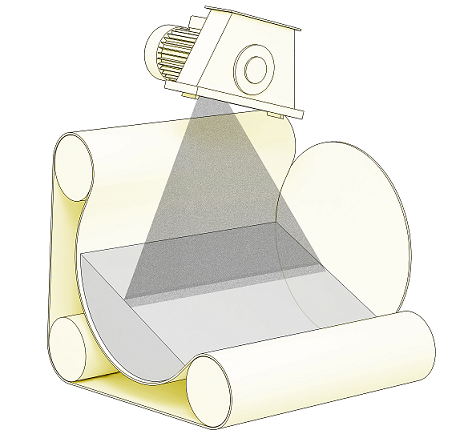